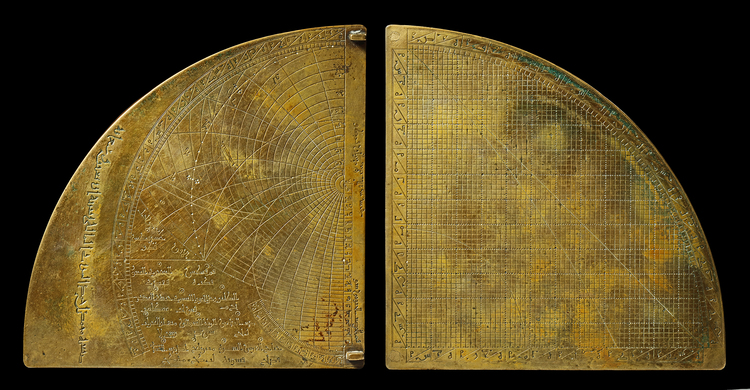 One side is engraved with an astrolabe-quadrant, for latitude 33°30’ (presumably for Damascus) with the positions of 15 stars marked and named. The other side is engraved, as is customary, as a sexagesimal sine/cosine quadrant, with arcs of the obliquity of the ecliptic and of sine and ‘versed sine’ and two prayer lines.
The inscriptions throughout are in simple eastern kufic script, and the numeration of the scales and the date in abjad. The inscription on the astrolabe side in the empty space below the astrolabe, in a larger font size, records the maker of the instrument as Muhammad ibn Ahmad al-Mizzi al-Maliki in 740 AH/1339-40 AD
The instrument is made of brass and measures 145 mm along each of the straight sides and on average 1.5 mm thick. The weight is 229 grams. The lead plumb bob (used for sighting) that came with this artefact is just under 25 mm long and weights 14.5 grams.

THE MAKER
The famous muwaqqit (mosque astronomer) and an astronomical instrument master, Muhammad b. Ahmad al‐Mizzī, was born in the village of Mizze near Damascus in 1291 AD. Sources about his life state that he studied in Egypt and that he was tutored by the famous Egyptian physician and encyclopedist Ibn al-Akfānī.
Working at the Umayyad Mosque in Damascus as a muwaqqit until his death, al-Mizzī owed his reputation to the fact that his didactic treatises were very popular among students who studied the science of miqāt, i.e. calculation of the prayer times. Moreover, the astrolabes and quadrants he made were considered among the best quality of its time and were sold at very high prices (2 dinars or more, for a quadrant).

OTHER QUADRANTS BY AL MIZI
Five instruments by al-Mizzi, apart from that offered here, have been recorded, all astrolabe-quadrants:

These instruments are similar in design although they vary in size. According to the above list, the instrument at hand seems to be his latest quadrant. This instrument, is previously unrecorded and no reference to the it been found in literature.

CONDITION
The instrument is generally in very good condition and is lightly patinated and has few small scuffs and marks, all of which is consistent with relatively light handling over many years. An metallurgic analysis of the composition of the brass of the instrument and comparison with one of the two al-Mizzi’s quadrants in the British Museum ( BM 1888, 1201.276), shows that it closely comparable both in terms of the main alloying components of copper and tin as well as the minor and trace elements present.
There is an accompanying leather carrying case although it seems that this case was made for a similar, but smaller instrument.