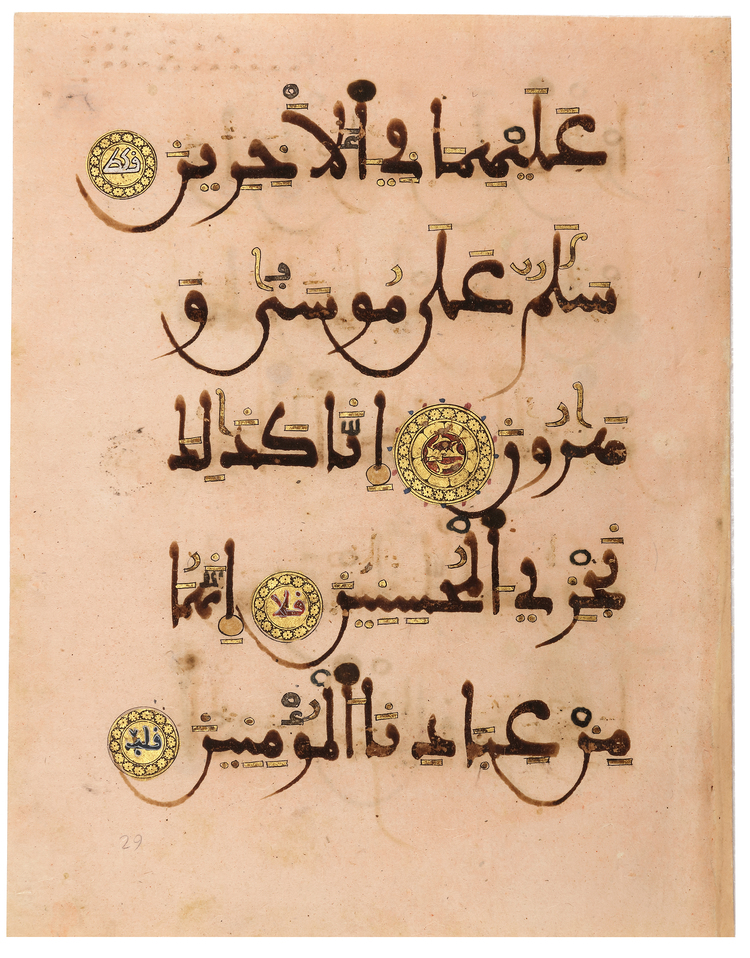 CATALOGUE NOTE
This is a fine example of Islamic manuscript production from the Muslim west. It was written on paper, which in medieval Islamic Spain was unusual, vellum still being the preferred material for the writing of the Quran. The paper was dyed pink, a rare luxury aspect; the script is a fine example of large scale Maghribi (the marking of the hamzas indicating a probable Andalusian origin) and the spacious arrangement of the script on the page allowed for the clear marking of the diacritics and vocalisation in colours and gold and the elaborate illuminated devices between verses. A particularly unusual aspect of the verse divisions is the use of 'abjad letters to mark the exact verse count of every verse. The illumination of the devices marking the verse divisions is of very high quality and the size of the devices allows the use of a relatively complex design, as witnessed in the present example.
A bifolium from the same manuscript is in the David Collection, Copenhagen (see von Folsach 2001, no.5, p.57). A section from the same Quran, containing 215 leaves, formerly in the collection of Maréchal Lyautey, was sold at the Hotel Georges V, Paris, 30 October 1975, lot 488. Single leaf and bifolia were sold at Sotheby's October 2012, lot 17 and 6 April 2011, The Stuart Cary Welch Collection, Part One, lot 11; 8 October 2014, lot 13; 22 April 2015, lot 51; 7 October 2015, lot 204; 25 October 2017, lot 10 and 25 April 2018, lot 4.