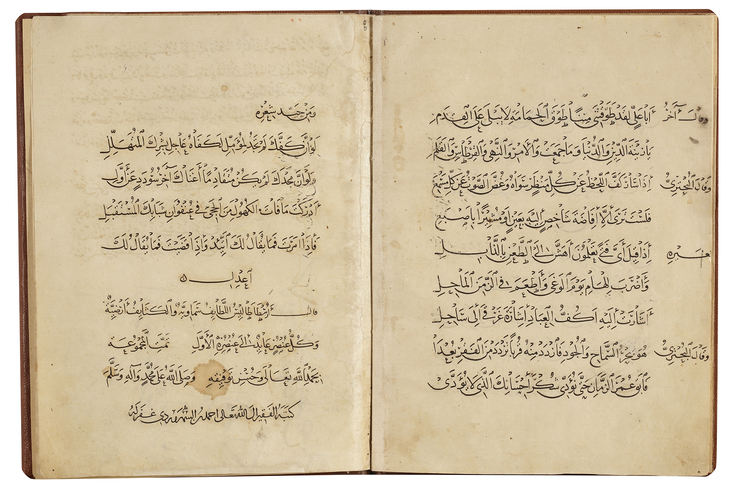 Arabic manuscript on paper, 7 leaves with 4 fly-leaves, 9 lines to each page, written in elegant black naskh script on a cream paper, poems of al-Sarsari and other poets in praise of the prophet. In deep brown morocco binding with flap.
18 by 24 cm.

The calligrapher: One of the six students of Yaqut, and he was called Sheikh Zadeh. He was born in Baghdad and became famous for his beautiful handwriting, which is similar to Yaqut’s handwriting, especially Naskh al-Jali.
It is said that he wrote the Holy Quran 33 times, a quarter of a Quran written by him preserved in the Museum of Iran, written on Bukhari paper. Two copies of the Quran in the Islamic Museum in Istanbul in naskh and Thuluth script, dated to the year 718. A number of pieces written in Rayhan, Thuluth, and Naskh script signature preserved in Top Qabu, dated 710. Al-Suhrawardi died in 720.

The poet:
Jamal al-Din al-Sarsari (588 AH - 656 AH / 1192 AD - 1258 AD) is the sheikh, the scholar, poet and writer, Jamal al-Din Abu Zakariya Yahya bin Yusuf bin Yahya bin Mansour bin Al-Muammar bin Abdul Salam Al-Ansari Al-Baghdadi Al-Sarsari, the Hanbali Sufi. He was known as Al-Sarsari in relation to Sarsar, a city near Baghdad, on a river named after her. The Tatars killed him when they entered Baghdad. He is considered one of the most glorified poets in praise of the Prophet. One of them, which he called “The Fabulous Kindergarten in the Impressive Ethics of Muhammad Al-Mustafa,” reached eight hundred and fifty verses, and he also had an illiterate consisting of five hundred and fifty-seven verses.
He was born in the year 588 AH, and he grew up seeking knowledge from his childhood, as he read the Quran with narrations on the companions of Ibn Asaker Al-Batayhi, and heard hadith from some Baghdad scholars, and learned jurisprudence, then studied Arabic and excelled in it, until it was said that he memorized the complete Sahih Al-Bukhary, and excelled in poetry systems until He became one of its great figures.
Many students took knowledge from Sheikh Al-Sarsari, including: Al-Hafiz Al-Damiati, Ali Ibn Husayn Al-Fakhri, Judge Suleiman bin Hamza, Ahmed bin Ali Al-Jazari, Zainab bint Al-Kamal, and others.