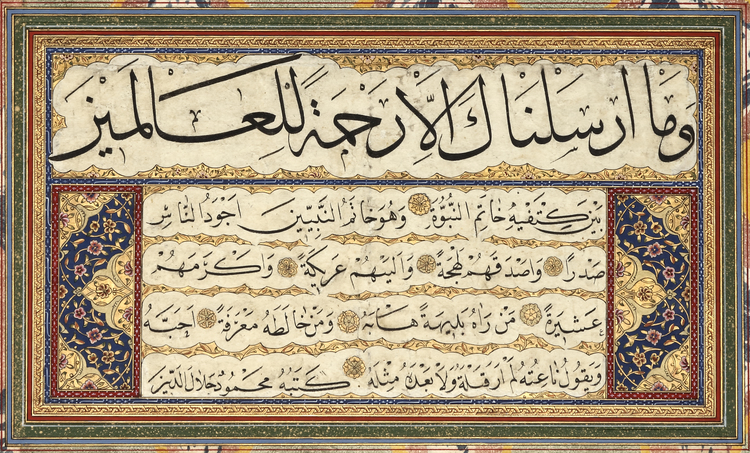 Arabic manuscript on paper, the top line in large black thuluth script depicting a verse from Quran praising the prophet.
A panel of four lines of black naskh script depicting a hadith, gold rosettes outlined in black seperating the script, reserved in clouds on a gold ground, flanked on both sides by royal gilt and blue decoration.
20 by 11 cm.

CATALOGUE NOTE
Born in the Dagestan region of Caucasia, his exact date of birth is uncertain. However, scholars have used an analysis of the progression of his skill and level of competence to estimate his date of birth as approximately 1750. As a boy, he moved to Istanbul with his father, Mahmud Jalaleddin, who had migrated together with Mehmed Efendi, one of the Shayshandy sheikhs. When he began practising as a calligrapher, he assumed the name Celaleddin Efendi.
He began his formal training with Abdullatif Efendi, who was a student of Ak Molla Omer Efendi and Hoca Râsim Efendi. However, following disagreements about style, he abandoned this tuition and was largely self-taught. He applied himself rigorously to an analysis of the works of the great 17th-century calligrapher, Hâfiz Osman.
Celaleddin adapted the style of Hâfiz Osman to one better suited to his own tastes. He also developed versions of thuluth and naskh that were strong and confident. The Sultan Abdulmecid had been one of Celaleddin's students and he encouraged the court calligraphers to produce works in Celaladdin's style. However, his style was short-lived because his version of thuluth was rigid and static and his scripts were ultimately abandoned in favour of Mustafa Rakim's more dynamic scripts. His wife Esa Ibret, a famous female calligrapher, was also his pupil (Sevket Rado, Türk Hattatlari, Istanbul, 1980, pp.199-200)
During his career, he produced many prayer books, murakkaa, hilye and plates with excellent inscriptions. He also produced many monumental inscriptions including for the Imaret of Eyüp Sultan Mosque and the tomb of Mihrişah Sultan.
He was living in Istavroz (Beylerbeyi's current Abdullahaga district) on the Bosphorus, at the time of his death in 1829 and was buried in the Sheikh Murad Lodge near Eyüp Sultan. Several levhas by Mahmud Celâleddin are in the Museum for Turkish and Islamic Art. Another, dated AH 1204, is in Konya (Mehdi Bayani, Ahval va Asar-e Khosh-Nevisan, Tehran, 1363/1984, p.1210).