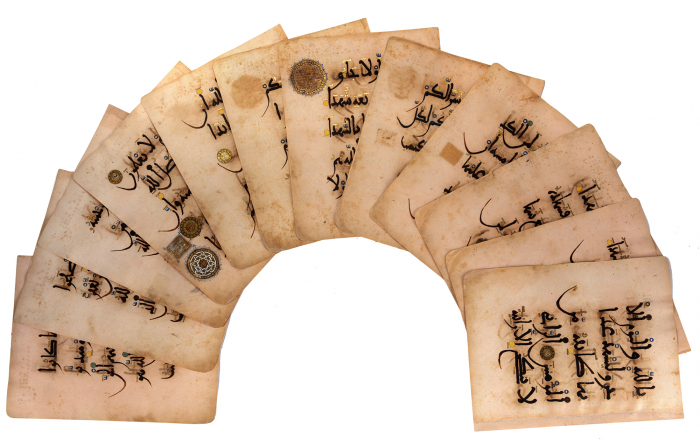 This is a fine example of Islamic manuscript production from the Muslim west, and the twenty-volume Quran from which this leaf originates is remarkable in many ways. It was written on paper, which in medieval Islamic Spain was unusual, vellum still being preferred material for the writing of the Quran; the paper was dyed pink, a rare luxury aspect; the script is a fine example of large scale Maghribi (the marking of the hamzas indicating a probable Andalusian origin) and the spacious arrangement of the script on the page allowed for the clear marking of the diacritics and vocalization in colors and gold and the elaborate illuminated devices between verses. A particularly unusual aspect of the verse divisions is the use of abjad letters to mark the exact verse count of every verse. The illumination of the devices marking the verse divisions is of every high quality and the size of the devices allows the use of a relatively complex design, as witnessed in the present example.

This is the only known Quran from Andalusia to be on pink paper. Scholars attribute this manuscript to be commissioned by one of the early sultans of the Nasirids (Bano Ahmar) ruling family which reigned between 1232-1492 AD. Abu al Ahmar or Mohammed the first declared himself as a sultan over Arjona in 1232, thereafter he concurred many cities to the south, including Granada, which was declared the capital of the Islamic Andalusian state in 1238 AD. The Alhambra castle is an exemplary of Bano Ahmar’s lavish art patronage, architecture and complex designs. The complete pink Quran must have been one of the most lavish Qurans at the time given the fact that it would take few thousand pages to be complete, it could possibly be commissioned either by Mohammed the first or his son. Mohammed the second as a symbol of divine authority to the ruling of the Bano Ahmar family.