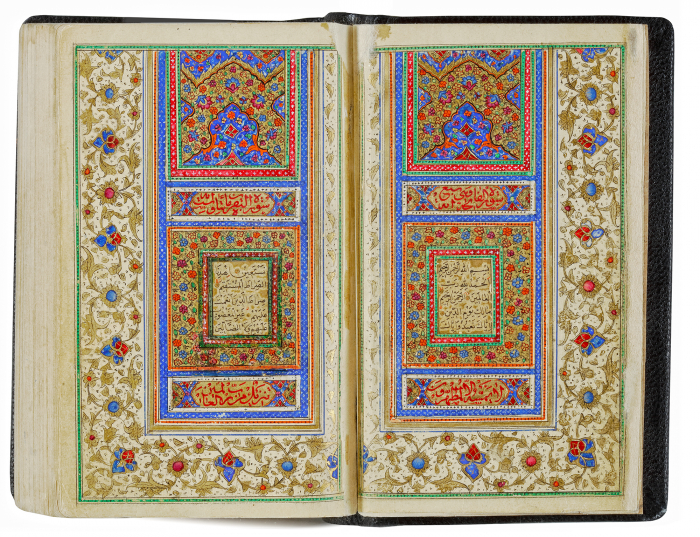 Arabic manuscript on paper, 551leaves plus two flyleaves, each folio with 12 lines of fine black naskh, text panels outlined in double gold and polychrome rules with gold floral illuminations, gold rosette verse markers, surah headings in gold thuluth, 'khams, 'ashr, and sajda' all marked in gold and in illuminated marginal devices, four illuminated headpieces, opening frontispiece bifolio with prayers in red thuluth on gold ground within a scalloped central medallion, preceded by an illuminated bifolio with surah Al-Fatiha and the beginning of surah Al-Baqarah, finispiece with prayers illustrated similarly to the frontispiece, re-margined in the Qajar period, in blind stamped brown morocco with a central blossoming flower.
text panel: 4.3 by 2.7cm., folio:11.8 by 7cm.

This Quran is signed and dated by Abd al-Rashid. Although the opening illumination and marginal decorations are done in the Qajar period, the original manuscript was produced in the Mughal court. This is evident by the illuminated chapter headings which are in a Mughal style and consistent with the 17th century date of the work. The original manuscript would have consisted of five sections (visible from presence of blank folios at the end of the chapters) which were later rebound as one volume and remarried in Qajar Iran.

It is possible to suggest that the calligrapher of this Quran was in fact Abd al-Rashid Deylami. Also known as 'Rashida' (d. 1670-71) he was a calligrapher who served in the Mughal court of Shah Jahan. Not only was he the nephew of the famed calligrapher and master of nasta'liq Mir 'Imad, he was also his disciple. After the assassination of his famous uncle in 1615, Abdul Rashid was given shelter by Jahangir at the Mughal court. He was subsequently appointed as the calligraphy instructor to Shah Jahari's favourite son Dara Shikoh, who was considered to be one of the finest calligraphers of the Mughal Royal household. After the death of Shah Jahan, Abdul Rashid continued work under the rule of Aurangzib in the city of Akbarabad (Agra).

Amongst the tazkereh writers on court calligraphers, it is Sepehr who mentions that besides from nastaliq in which 'Abd al-Rashid was so highly celebrated, he also wrote in naskh and ta'liq. There are no other recorded calligraphers called Abd al Rashid at the Mughal court from this period and no other Quran manuscripts known by this scribe in naskh, making this manuscript extremely rare if in fact it is the hand of Deylami. The style of naskh in this Quran shows the hand of an experienced but elderly calligrapher, which although consistent and strong, reveals slight weaknesses in some letters such as oaf and lam. This would be in line with the fact that this manuscript was completed a year before Dylami's death.
The death date of Abd al-Rashid has often been debated. However, as discussed in Bayani (ibid), the correct date is most likely 1081 AH, due to the existence of a poem by Sa'idaye Ashraf who was a student of Abd al- Rashid, and who on the order of Zeb al-Nisa the talented daughter of Shah Jahan (also one of 'Abdul Rashid students) wrote a memorial poem after his death, which is dated to AH 1081. This manuscript was therefore completed one year before Abdul Rashid's death.