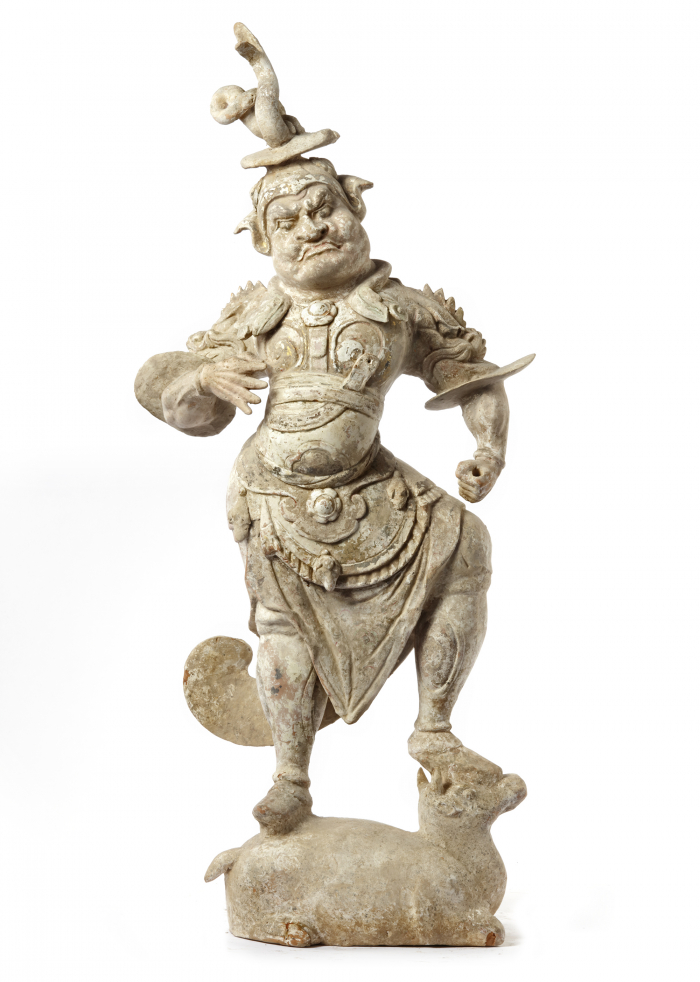 The Tang dynasty was a luxuriant period and their aristocrats could afford sumptuous tombs. Depending their rank, the tomb chamber displayed larger and better quality of a varied array of pottery horses, camels, grooms and other subjects. The entrances to these chambers however were always watched over by glazed or painted pottery guardians. The principle guardians, directly fronting the entrance, were a pair of seated earth spirits. Just behind these were normally positioned a pair of fiercely guardians and sculpted by the artist(s) in a complementary standing posture. According to archaeological bevidence however, richer burials could have up to four standing guardians and in fact it is not to be excluded that once this presented earthenware guardian was part of such an extended group, taking the quality and comparable size into consideration.
This finely painted earthenware guardian stands in rather triumphant and menacing posture with booted feet atop a reclining animal placed on a rocky-shaped base. The face modelled with ferocious and frowning expressions set with bulging eyes, broad nose, pronounced lips embellished with a moustache. Puffy cheeks and denoted chins complete the facial traits.
On top of the head a helmet with upright shaped side and back flaps, ornamented with a snake-like animal. Shoulders with animal-shaped epaulets.
The guardian wears thigh-length, multi-layered armours covering his body. These are secured with straps and partly twisted ribbons and overall painted with
cloud, floral and striped motifs. Under his armours he wears a tunic which triangular shaped front part is painted with remnants of various floral designs

It must have been a majestic though frightening encounter for the intruder with guardians in the shimmer light, when trying to disturb the deceased person or even worse to rob precious objects from him. In fact, this concept of guardians overlooking the entrance of such a tomb chamber predates the Tang period. The first examples were placed directly on rocky platforms. Only around the mid-seventh century a new type evolved, known as shenwang. These ‘heavenly kings’ subdued now animals, placed on pedestals. One of the subdued animals is the ox, while the other represents a deer-like creature. More commonly this deer-like beast is addressed to as guai or ‘strange’. A slightly later development of the eighth to ninth century, and eventually predominating, sees them trampling on demonic figures. In both latter forms they are known as well as tianwang or in Sanskrit lokapala. As they strongly resemble the four guardians of the Buddhist law, which faith had imbued the entire Tang upper-society by now, both concepts became integrated.
Based on style and iconography, this finely sculpted guardian can be safely placed in the late seventh to early eighth century.