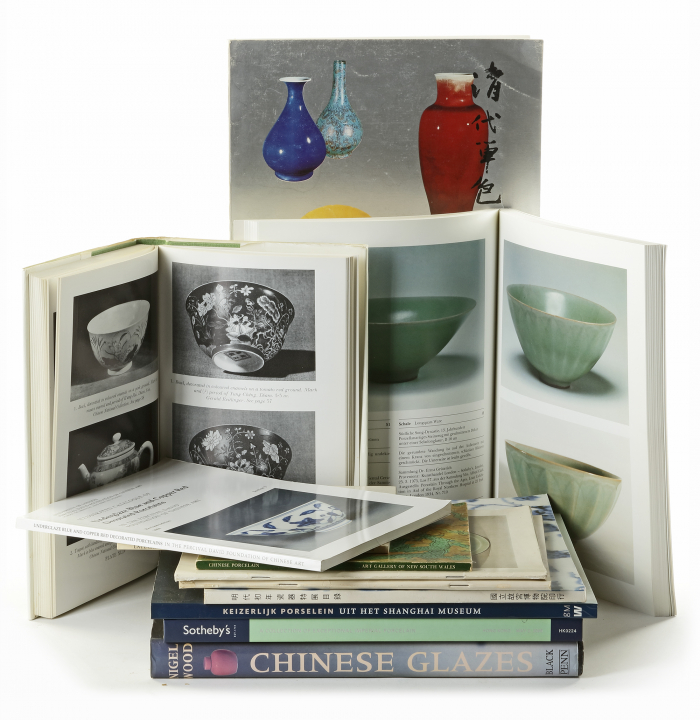 "Wiesner, U. Chinesische Keramik - Meisterwerke Aus Privatsammlungen.
Koln: Museum Fur Ostasiatisch Kunst, 1988. First Edition. Wonderful exhibition catalogue of Chinese ceramics from private collectors. Now out of print. 193 pages and numerous colour plates.
Myrtle, Hepburn. Late Chinese Imperial Porcelain.
Sydney: Art Gallery of New South Wales, 1980. First Edition. 53 Pages, black and white images. Text in English. Catalogue to the exhibition held in the Art Gallery of New South Wales.
Jenyns, S. Later Chinese Porcelain - the Ch'ing Dynasty.
London: Faber & Faber, 1971. Fourth Edition. 111 pages, 126 plates, 6 in colour, appendices, bibliography and index, cloth. This pioneering work plays no small part in bringing to the study of Chinese porcelain a greater appreciation in the West of the finest porcelain of the Qing dynasty.
Medley, Margaret. Illustrated catalogue of Celadon Wares.
London: Percival David Foundation, 1977. First edition. 40 Pages, 120 objects from the Percival David Collection, described of which 90 are depicted in black and white.
Myrtle, Hepburn. Chinese Porcelain of the Ming and Ch'ing Dynasties.
Sydney: Art Gallery of New South Wales, 1977. First Edition. 60 Pages, 23 black and white images. Text in English. Catalogue to the exhibition held in the Art Gallery of New South Wales.
Medley, M. Illustrated Catalogue of Ming and Ch'ing Monochrome in the Percival David Foundation of Chinese Art.
London: Percival David Foundation, 1973. First Edition. 63 pages., 14 plates with numerous black and white illustrations, bibliography.
Sotheby's. A Collection of Exceptional Imperial Porcelain.
Hong Kong: Sotheby's, 2005. First. 160 Pages, 100 lots described in detail and depicted in colour. A fine collection sold on 9 June 2004.
Wood, Nigel. Chinese Glazes.
London: Black, 1999. First edition. 280 Pages, 100 colour and 180 black and white illustrations. Chinese pottery has long been esteemed not only for its beauty and delicacy but also for the utility and efficiency evident in the potter’s skill. In this major work on Oriental ceramics and glazes, a leading authority on Far Eastern pottery traces the development of Chinese glazes and glazing techniques from antiquity to the modern era. Nigel Wood describes how glazes were made, provides an analysis of their composition, and shows how they can be duplicated today with common raw materials available in the West. The book is lavishly illustrated with nearly three hundred photographs--one hundred in full colour. These depict examples of the Chinese arts as found in pottery ranging from simple earthenware jars excavated at Neolithic sites to exquisitely designed dishes found in imperial tombs. They also show examples of modern Western wares that employ these remarkable glazing techniques. Chinese Glazes is an essential reference for scholar and collector alike. Its wealth of illustrative material and technical information make it an inspiring work as well for anyone seeking to recreate these astonishing wares. A fabulous work!
National Palace Museum. Catalogue of a Special Exhibition of Early Ming Period Porcelain.
Taipei: National Palace Museum, 1982. First edition. 130 Pages. Illustrated in colour and black and white. Chinese and English text. Catalogue from an exhibition of Early Ming Porcelains at the National Palace Museum, Taipei in 1982.; ""The National Palace Museum takes pride to present this 'Special Exhibition of Early Ming Porcelains', comprising a total of seventy-three pieces, for the enjoyment of those who love porcelain. This exhibition concentrates on blue-and-white wares, the finest examples of which are not often seen outside China. For a time, however, large quantities of this ware found their way into the old mosques and palaces of Persia and Turkey under the name of 'trade porcelain'. This exhibition also includes examples of the so-called 'Palace porcelains'. Since early Ming porcelains rarely had reign-marks, these wares are simply grouped under the category of 'Early Ming porcelains'. Monochrome wares in this exhibition include white, red and blue-glazed vessels. Each is special in its one way; a particular example is the white-glazed ware decorated with both stamped and painted floral patterns. The decorative motifs on this vessel are so subtle and evanescent as to be almost invisible without the aid of strong illumination. Another rare piece is the monochrome blue-glazed with golf-leaf dragon decor, which is an early example of the use of decorative gold-leaf.
Chiang Fu-tsung & Sing Sheng Chang. Monochrome Porcelains of the Ch'ing Dynasty.
Taipei: National Palace Museum, 1981. First edition. 168 Pages, illustrated in colour. Chinese and English text. The first edition of this catalogue showing 100 monochrome porcelains housed in the magnificent National Palace Museum in Taipei.
Eliens, Titus M. Keizerlijk Porselein uit het Shanghai Museum.
Zwolle: Waanders, 2011. First edition. 144 Pages, richly illustrated in colour. Text in Dutch. A wonderful catalogue that accompanied the exhibition of imperial porcelains from the Shanghai Museum held in The Hague in 2011. The 100 porcelains exhibited dated from the Wanli to the Xuantong periods.
Howard Hansford, S. & Pierson, Stacey. Illustrated Catalogue of Underglaze Blue and Copper Red Decorated Porcelains (Revised edition).
London: Percival David Foundation, 2004. 120 Pages, richly illustrated in colour and black and white. For years the original version of 1974 and later revised in 1976 by Margret Medley was by far the standard work on Chinese blue and white porcelain. This new version has now gone further using the latest knowledge on the subject to revise the work to modern standards."