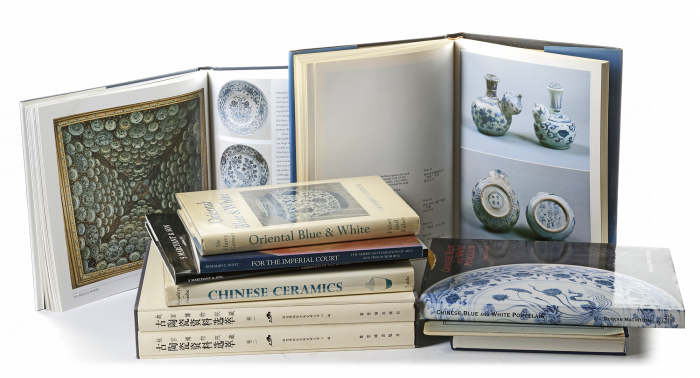 "Palace Museum Ancient Ceramics Research Center. Palace Museum Collection: Ancient Ceramics (2 Volumes).
Beijing: Palace Museum, 2005. First edition. Volume 1: 255 Pages, Volume 2: 353 Pages. Text in Chinese. 500 pieces illustrated with colour plates. Vol. 1 Table of Contents: Shang - Ming Dynasty Artefact Listing Shang - Ming Dynasty Colour Plates Shang - Wu Song - Yuan Ming. Vol. 2 Table of Contents: Qing Dynasty: Shunzhi Period - Xuantong Period Artefact Listing Qing Dynasty: Shunzhi Period - Xuantong Period Color Plates Time Periods Included: Shunzhi, Kangxi, Yongzheng, Qianlong, Jiaqing, Daoguang, Xianfeng, Tongzhi, Guangxu, Xuantong. The Palace Museum's extensive collection of ceramics consists of over 350,000 pieces, 320,000 of which date to the Qing Dynasty. This two volume set celebrates the historic artistry of Chinese ceramics starting with the Shang through Ming Dynasties (Vol. 1) as well as the vast variety of the Qing (Vol. 2). The collection includes 700 pieces from the glorious rules of Yongle and Xuande during the Ming as well as 7000 pieces from the Kangxi period of the Qing. Here, over 500 selections are highlighted, showcasing one of the largest ceramic collections in the world.
Garner, Sir Harry. Oriental Blue & White.
London: Faber & Faber, 1954. Reprint. 86 Pages, followed by 100 plates depicting multiple photographs in black and white. Various colour photographs throughout the text. An indispensable work and standard reference work.
Hayashiya, Seizo & Hasebe, Gakuji. Chinese Ceramics.
Tokyo: Tuttle & Co., 1966. First edition. 22 Tipped-in colour plates, 92 black and white plates, over 200 text illustrations. Translated by Charles A. Pomeroy. This book introduces masterworks from China's over 3000 years of superlative ceramic design and production. A fine reference.
Carswell, J. Blue & White: Chinese Porcelain Around the World.
Chicago: AMR, 2000. First Edition. Chinese blue and white porcelain has made a unique contribution to the history of ceramic technology. Throughout its development from the beginning of the fourteenth century, through its technical originality and artistic brilliance, it has continued to captivate and inspire the entire world. This richly illustrated book traces the history and evolution of blue and white in China, first during the Yuan dynasty (1271-1368), when the Mongols ruled all of Asia, creating an environment in which blue and white could travel swiftly as far as the Mediterranean. In the fifteenth century the Chinese became enamoured of their own product, while at the same time the Ming potters were susceptible to ideas from the Islamic world and commercial and aesthetic pressures during the colonial period of European expansion. From the sixteenth century onwards, passion for collecting became a major influence on the concept of chinoiserie. Finally John Carswell shows how the combined efforts of scholars, collectors and archaeologists have illuminated how, why and when blue and white developed and has made such a major impact on world civilization. The stunning illustrations are from museums and private collections around the world and include some never before published. Important Note: The book also includes a very special unpublished material from a mysterious fourteenth century shipwreck in the Red Sea. Seen by only a handful of experts, the findings from this shipwreck are very important for art history and are published here for the first time. Full details with line drawings and complete mini-catalogue of this material are given in the book.
Macintoch, Duncan. Chinese Blue and White Porcelain.
Woodbridge: ACC, 1994. Third edition. 236 Pages, illustrated throughout in colour. A fine book to get a better understanding of Chinese blue and white porcelain.
S. Marchant & Son. Two Hundred Years of Chinese Porcelain 1522 – 1722.
London: S. Marchant & Son, 1998. First Edition. 88 Pages, 65 items and illustrated in colour. With an introduction to John Ayers, this catalogue presents a variety of Ming and Qing porcelain, both imperial and non-imperial. Pieces include blue-and-white, wucai, and famille-verte.
Scott, Rosemary E. For the Imperial Court: Qing porcelain from the Percival David Foundation of Chinese Art.
London: Suntree Publishing, 1997. First Edition. 160 pp., over 65 colour plates, 8 b/w figures, glossary, bibliography, New York, 1997. Catalogue of the first exhibition focusing on the Percival David Foundation´s remarkable 17th- and 18th-century porcelains to travel to the U.S. The collection is particularly rich in examples of the rare imperial porcelains decorated with delicate overglaze enamel design, documenting one of China’s enduring contributions to the arts. The magnificent Qing examples in the exhibition and in this volume, totalling 65 pieces, provide a wonderful overview of the Chinese tradition of art connoisseurship during the last period of dynastic rule. Highlights include a basket-shaped perfume holder, Kangxi period, 1662-1722, and a hanging vase for a sedan chair, Qianlong mark and period, 1736-95.
Yeo, S.T. & Martin, Jean. Chinese Blue and White Ceramics.
Singapore: Arts Orientalis, 1978. First Edition. 315 pages, over 230 colour plates, text in English and Chinese, index. Catalogue of an important exhibition of Chinese blue and white at the National Museum of Singapore.
Garner, Sir Harry. Loan Exhibition of Chinese Blue and White Porcelain 14th - 19th Century.
London: OCS, 1953. First Edition. 32 pages, 18 plates in black and white
Jenyns, S. Ming Pottery and Porcelain.
London: Faber & Faber, 1988. First Edition. 237 Pages, 124 black and white plates and 4 in colour depicting multiple items. A comprehensive, authoritative history of ceramic arts in Ming China."