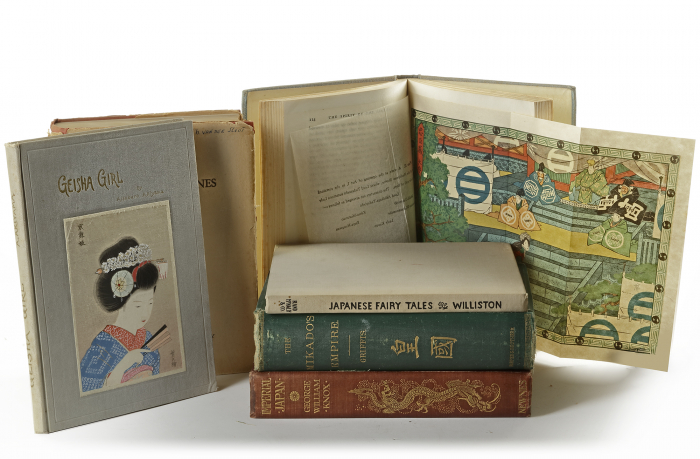 "Knox, George William Imperial Japan - The Country and Its People.
London: George Newnes, 1905. First edition. 294 Pages, 24 illustrations. An interesting early 20th century work on the historical and cultural aspects of Japan. George William Knox, D.D., LL.D. (1853 - 1912) was an American Presbyterian theologian and writer, born at Rome, New York. He graduated from Hamilton College in 1874 and from Auburn Theological Seminary in 1877, after which he went as a missionary to Japan, where he was professor of homiletics in Tokyo and professor of philosophy and ethics at the Imperial University of Tokyo.; Griffis, W.E. The Mikado's Empire. New York: Harper & Brothers, 1877. Second edition. 645 Pages, Illustrated in black and white. Book I. History of Japan, from 660 B.C. to 1872 A.D. Book II. Personal Experiences, Observations, and Studies in Japan, 1870-1874. A highly interesting and scarce work. Unfortunately not in the best condition which is refelected in the price. Provenance: From the library of Maurice Champoud, Switzerland.; Williston, Teresa Peirce. Japanese Fairy Tales - First Series. Chicago, New York & London: Rand McNally & Co, 1904. First edition. 80 Pages, Illustrated by Sanchi Ogawa. First Series Contents: The wonderful teakettle; The wood-cutter's sake; The mirror of Matsuyama; The eight-headed serpent; The stolen charm; Urashima; The tongue-cut sparrow; Shippeitaro. ¶ From the library of Maurice Champoud, Switzerland.; Sakae Shioya Chushingura - An Exposition. Tokyo: The Hokuseido Press, 1940. First edition. 236 Pages, 4 folding illustrations taken from Hiroshige prints. Chushingura is the title given to fictionalized accounts in Japanese literature, theatre, and film that relate the historical incident involving the Forty-seven Ronin and their mission to avenge the death of their master, Asano Naganori. From the library of Maurice Champoud, Geneva, Switzerland.; Akiyama, Aisaburo Geisha Girl. Yokahama: Yoshikawa Book Store, 1937. Third edition. 104 Pages, illustrated in colour and black and white. A lovely early book on all aspects of Geisha, traditional Japanese female entertainers who act as hostesses and whose skills include performing various arts such as classical music, dance, games and conversation, mainly to entertain male customers.; Ponsonby-Fane, R. Studies in Shinto and Shrines: Papers Selected from the Works of the Late R.A. B. Ponsonby - Fane, LL. D. Kyoto: Ponsonby, 1953. Revised edition. 575 Pages. This collection studies Shinto rites and festivals and shrine buildings. Eleven shrines are discussed in detail, including Tatsuta Jinja, Aso Jinja and Suminoe-No-Okami."