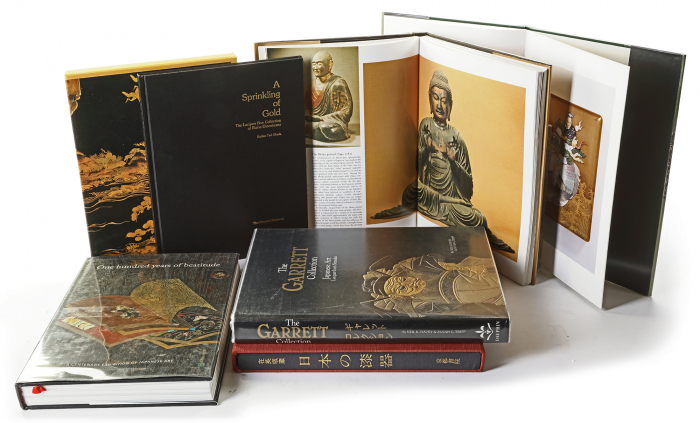 "Dean, M. & H. Japanese Lacquer - an Exposition by M. & H. Dean.
Tokyo: Kyoto Shoin, 1984. First edition. 221 Pages, 141 colour illustrations, text in Japanese with list of plates and captions in English, silk slipcase. An important catalogue of a private collection of lacquer formed in a time frame of 10 years. A great number of netsuke are also illustrated and described. A beautiful work!
Okada, Barabara. A Sprinkling of Gold: The Lacquer Box Collection of Elaine Ehrenkranz.
Newark: Newark Museum, 1983. First edition. 144 Pages, 56 items illustrated, many in colour, glossary, bibliography, index. Catalogue of an exhibition of Japanese lacquer box collection of Elaine Ehrenkranz at the Newark Museum. The essays discuss how Japanese lacquer boxes are made, their materials, techniques, and evolution throughout the periods.
Bourne, Jonathan et al. Lacquer - An International History and Collectors Guide.
Wiltshire: Crowood Press, 1984. First Edition. 256 Pages, fully illustrated in colour and black and white. A very interesting and useful work on all matters concerning lacquer, from all countries. From the Oliver Impey Library.
Tripp, Susan G.; Davey, Niel K. The Garrett Collection of Japanese Art: Lacquer, Inro and Netsuke.
Oxford, United Kingdom: Dauphin Publishing (Oxford) Ltd, 1991. First Edition. 325 Pages, 480 illustrations, 230 in colour, text in English and Japanese, glossary, bibliography. An exclusive publication on the Garrett Collection, one of the earliest and most distinguished American collections of Japanese lacquer, inro, and netsuke.
Barry Davies Oriental Art. Contemporary Lacquer - Unryuan, The New Generation.
London: Barry Davies Oriental Art, 1993. First edition. 46 Pages, 28 objects illustrated in full colour, black and white illustrations. Glossary. Unryuan is a contemporary lacquer artist who works in traditional techniques but with the addition of his own genius. Exhibition catalogue from Barry Davies Oriental Art.
Moss, Paul et al. One Hundred Years of Beatitude: A Centenary Exhibition of Japanese Art.
London: Sydney L. Moss Ltd., 2011. First edition. 372 Pages, approximately 250 colour illustrations. One Hundred Years of Beatitude surveys varied highlights of the Sydney L. Moss gallery’s idiosyncratic taste across aspects of mostly Edo period painting, calligraphy, sculpture, lacquer, netsuke and the smoking paraphernalia of “tonkotsu” and tabakoire. It contains an unmistakable flavour of the Chinese influence and especially of a Confucian content in Japanese art, in both literary and socio-political regards. The survey begins with twenty-plus paintings and calligraphies. The most important focus of the book is that on Ogawa Haritsu (1663 - 1747) alternatively known as Ritsuo, a poet, painter, sculptor, ceramicist, metalworker and printmaker, but best known both in the West and Japan as a lacquerer and inlayer. Illustrated and discussed here is the most remarkable group of paintings, sculptures and lacquer-inlay works viewed together since the contents of Tsugaru Castle were dispersed in the early 20th century. Four essays discuss Ritsuo in some depth, one of those extensively illustrated, another the first English translation of Professor Akio Haino’long “Nihon no Bijutsu” essay on the artist. Scattered among the introductory essays will be found translations of all Ritsuo’s known haiku."