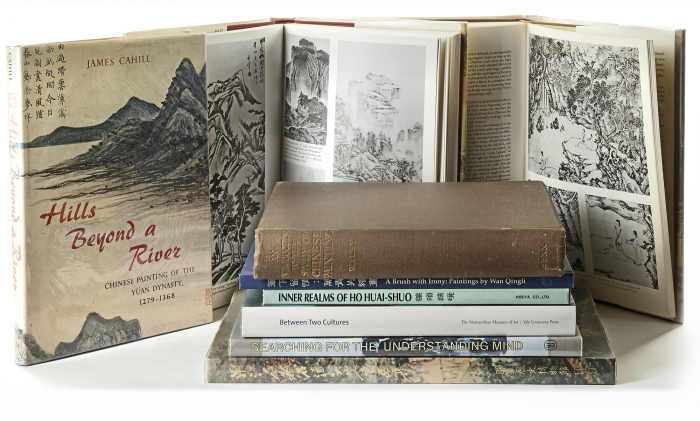 "Waley, Arthur. An Introduction to the Study of Chinese Painting.
London: Ernest Benn, 1923. First edition. 264 Pages, followed by 49 plates in black and white each preceded by tissue guards. An early standard work on the subject of Chinese painting. The paintings were reproduced from various collections, such as Eumorfopoulos, Yamanaka, Stoclet, Kokka and the British Museum. Scarce! ;
Luk, Yu Ping. A Brush with Irony - Paintings by Wan Qingli.
Hong Kong: University Museum and Art Gallery & University HK, 2006. First edition. 80 Pages, Illustrated in colour. Text in English and Chinese. Catalogue of Wan Qingli's solo exhibition at the University Museum and Art Gallery of The University of Hong Kong. Images of works are accompanied with colophons, the artist's inscriptions and seals. With artist biography. ;
National Museum of History. Four Monks of the Late Ming: Chien-chiang, Shih-ch'i, Shih-t'ao, Pa-ta-shan-jen.
Taipei: National Museum of History, 1978. First edition. 216 Pages, illustrated in colour and black and white depicting 88 plates. Text in English and Chinese. The Four Monks were painters from the late Ming to early Qing period, who became monks because they could not bare the fall of the Ming dynasty and the reign of the Manchus. The Four Monks expressed their frustration, confusion and feeling of loss in their paintings; they portrayed the complicated state of their inner world in their unique styles that differ from the old traditional patterns of the orthodox literati painters, such as their contemporary Four Wangs. Therefore they are also known as the individualist masters. The painting styles of the Four Monks exerted a great influence on the Yangzhou School and future generations of painters. A scarce title! ;
Joan Stanley-Baker. Inner Realms of Ho Huai-Shuo.
Taipei, Taiwan: Hibiya Co. Ltd, 1981. First Edition. 96 pages, text in English and Chinese. Full colour images throughout. The highlights of the renowned Chinese artist Ho Huai-Shuo. A biography of his life and work and an overview of his past exhibitions. ;
Guanzhong, Wu. Searching for the Understanding Mind: Selected Works of Wu Guanzhong in 1990s.
Beijing: Foreign Languages Press, 1995. First edition. 126 Pages, illustrated in colour. English text. Wu Guanzhong (1919 - 2010) was a contemporary Chinese painter widely recognized as a founder of modern Chinese painting. He is considered to be one of the greatest contemporary Chinese painters. Wu's artworks had both Western and Eastern influences, such as the Western style of Fauvism and the Eastern style of Chinese calligraphy. Wu had painted various aspects of China, including much of its architecture, plants, animals, people, as well as many of its landscapes and waterscapes in a style reminiscent of the impressionist painters of the early 1900s. He was also a writer on contemporary Chinese art. ;
Cahill, James. Complete Series: Chinese Painting Hills Beyond a River - Chinese painting of the Yuan Dynasty (1279-1368) Parting at the Shore - Chinese painting of the early and middle Ming Dynasty (1368 - 1580) The Distant Mountains - Chinese painting of the late Ming Dynasty ( 1570-1644).
New York - Tokyo: Weatherhill, 1976-1982. First Edition. Text in English. Full colour and black & white images. A thorough study, into the changes the Chinese painters went through when the Yuan dynasty came to power. The following two volumes explore the influence and artists of the Ming dynasty. Exquisite examples are shown to illustrate the authors theories. A set which provides a wonderful overview of the artists of the day for the laymen as well as the scholar. Rare to find a complete set of this standard reference. ;
Fong, Wen. C. Between Two Cultures.
New York, London: Metropolitan Museum of Art/Yale University, 2001. First Edition. 286 pages, text in English. Full colour and black & white images. This is a personal journey into modern Chinese paintings, by the author, who has taken a great deal of paintings from the collection of Robert H. Ellsworth as an example. The paintings are to be seen in the Metropolitan Museum of Art. The time space discussed is between the 1860's - 1980. This book deals with both traditionalist and modernizing Chinese masters from the comparative perspectives of East and West, traditional and modern."