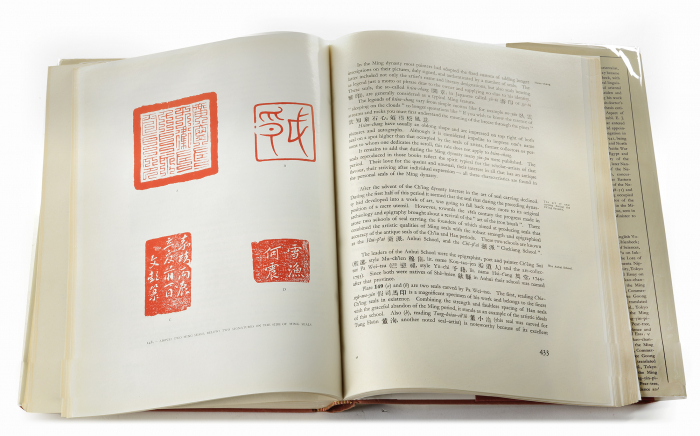 "Gulik, Robert H. van Chinese Pictorial Art as viewed by the Connoisseur
Rome: Instituto Italiano Per Il Medio Ed Estremo Oriente, 1958. Limited first edition. 537 Pages, 160 illustrations, 42 paper samples mounted in a separate booklet in the rear pocket as issued. The technique of mounting scrolls is described in detail, and the author also examines methods and means of detecting fakes and forgeries. Special attention is given to seals. Limited to 950 copies of which this is # 604. From the library of Jacob Pins with his exlibris on the inner board. Are rare work with a wonderful provenance. Very good: slight discolouration to top and bottom of the spine. Dustjacket worn with losses but in protective Mylar.
¶ Robert Hans van Gulik (August 9, 1910 - September 24, 1967) was an orientalist, diplomat, musician (of the guqin), and writer, best known for the Judge Dee historical mysteries, the protagonist of which he borrowed from the 18th-century Chinese detective novel Dee Goong An. Robert van Gulik was born in Zutphen, the son of a medical officer in the Dutch army of what was then called the Dutch East Indies (modern-day Indonesia). He was born in the Netherlands, but from the age of three till twelve he lived in Batavia, Dutch East Indies (now Jakarta), where he was tutored in Mandarin and other languages. He went to Leiden University in 1934 and obtained his PhD in 1935. His talents as a linguist suited him for a job in the Dutch Foreign Service, which he joined in 1935; and he was then stationed in various countries, mostly in East Asia (Japan and China). He was in Tokyo when Japan declared war on the Netherlands in 1941, but he, along with the rest of the Allied diplomatic staff, was evacuated in 1942. He spent most of the rest of World War II as the secretary for the Dutch mission to Chiang Kai-shek's Nationalist government in Chongqing. While in Chongqing, he married a Chinese woman, Shui Shifang, the daughter of a Qing dynasty Imperial mandarin, and they had four children together. After the war ended, he returned to the Netherlands, then went to the United States as the counsellor of the Dutch Embassy in Washington D.C. He returned to Japan in 1949 and stayed there for the next four years. While in Tokyo, he published his first two books, the translation Celebrated Cases of Judge Dee and a privately published book of erotic colored prints from the Ming dynasty. Later postings took him all over the world, from New Delhi, Kuala Lumpur, and Beirut (during the 1958 Civil War) to The Hague. In 1959 Van Gulik became correspondent of the Royal Netherlands Academy of Arts and Sciences, he resigned in 1963. In 1964 he became a full member, and the next year he became a foreign member. From 1965 until his death in The Hague in 1967, he was the Dutch ambassador to Japan. Jacob Otto Pins (17 January 1917 - 4 December 2005) was a German-born Israeli woodcut artist and art collector, particularly of Japanese prints and paintingsand being one of Israel's foremost art collectors. His book on Japanese Pillar Prints, Hashira-e is the definitive work on the subject. Pins' extensive collection of Japanese woodprints, paintings and sculptures was left to the Israel Museum, where it forms the Jacob Pins Collection. Most of his own artwork was left to his home town and the Forum Jacob Pins museum opened there in 2008. "